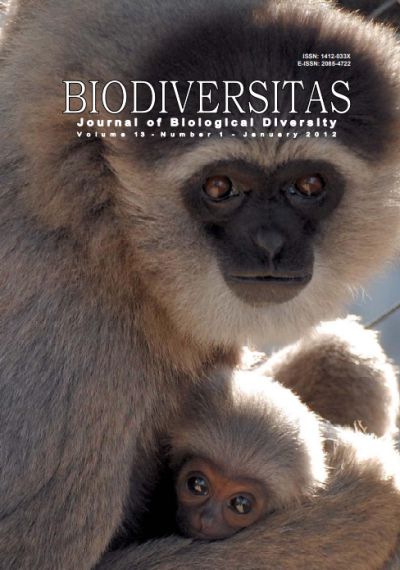 Setiawan A, Nugroho TS, Wibisono Y, Ikawati V, Sugardjito J. 2012. Population density and distribution of Javan gibbon (Hylobates moloch) in Central Java, Indonesia. Biodiversitas 13: 23-27. A survey of Javan gibbon (Hylobates moloch) was conducted from July 2009 to November 2010 in the Dieng Mountains and Mount Slamet, Central Java, Indonesia. The purpose of the survey is to assess current population status and its distribution, including factors threatening the species. We used line transect method to estimate gibbon densities. We detected a total of 144 individuals in 56 groups on a 212.7 km length trail. Average group size was calculated as 2.57 (ranging between 2 and 7) individuals. We compared the population density between Mount Slamet and Dieng Mountains. It was found that the density in Mount Slamet was lower than in the Dieng Mountains with 1.7 ind./km2 compare to 2.5-7.57 ind/km2 respectively. In total, there are about 1,034 individuals of gibbon in Central Java which is divided in two sub populations. The one in Mount Slamet is about 175 individuals whereas in the range of Dieng Mountains is 881 individuals. Establishing a protected area and enhancing conservation awareness are critically important for survival of this endangered ape. Conservation awareness should consider human needs of local people surrounding the forest habitat.