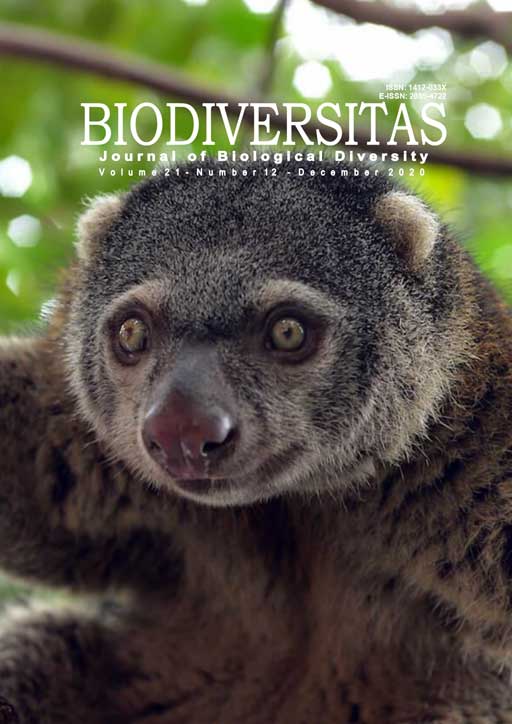 Abstract. Leksono AS, Yanuwiadi B, Afandhi A, Farhan M, Zairina A. 2020. The abundance and diversity of grasshopper communities in relation to elevation and land use in Malang, Indonesia. Biodiversitas 21: 5614-5620. Ecological factors include interactions of the community members with numerous biotic and abiotic factors such as temperature, humidity, precipitation, light intensity, and seasonality show an altitudinal gradient. Most grasshopper species play a role as herbivores and are a good source of protein for other animals such as amphibians, small reptiles, birds, and small mammals. This study aimed to analyze variations in the abundance, richness, and diversity of grasshopper species along an altitudinal gradient. This research was conducted in five locations in Malang District, East Java, Indonesia, namely Bantur, Sumber Pujung Lawang, Pujon, and Poncokusumo. Grasshopper sampling was carried out by the sweeping method using an insect net. Sweepings were carried out on four plots with each plot size of 2 x 10 m2. Sampling was conducted four times from June to August 2020. The data were analyzed using the Shannon Wiener index (diversity analysis) and the Bray-Curtis index. The differences between locations were tested by one-way analysis of variance. Land use was analyzed by ArcGIS, using Landsat imagery 8. The abundance of grasshoppers had a significant negative correlation with elevation. That correlation was positive to species richness and diversity of grasshoppers. That with species diversity was significant, while that with species richness was not significant. The greatest abundance of the grasshopper was found in the middle elevation in Lawang (19.39 ± 2.12). In contrast, the highest species richness and diversity were found in the highest elevation in Poncokusumo (richness = 15.75 ± 1.60 and H '= 2.58 ± 0.11). Land use variation was not significant on abundance, species, richness, and diversity of grasshoppers. Interestingly, the high similarity of the grasshopper compositions in low elevation habitats was detected, indicating that land use in the low land area was remarkable. The abundance of grasshopper had a significant positive correlation with temperature but negatively correlated with humidity. There was no significant correlation among species richness, species diversity with temperature and humidity.

Most read articles by the same author(s)