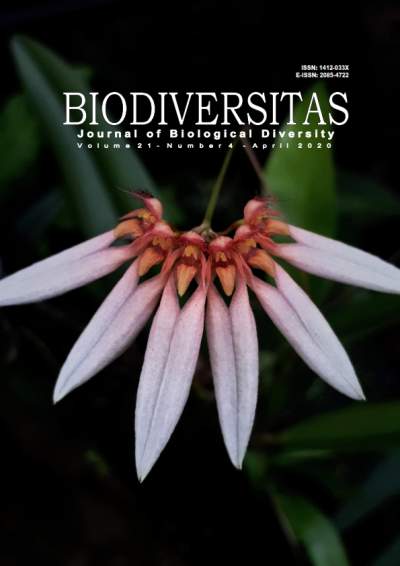 Abstract. Mau YS, Ndiwa ASS, Oematan SS. 2020. Brown spot disease severity, yield and yield loss relationships in pigmented upland rice cultivars from East Nusa Tenggara, Indonesia. Biodiversitas 21: 1625-1634. Brown spot is one of the most devastating diseases of rice, which could lead to total yield loss. The disease has a worldwide distribution, more specifically in areas where water supply is scarce, most specifically in the dry upland areas. Almost all stages of rice are affected by the disease, where leaves and grains are mostly affected. Considerable differences exist in susceptibility to brown spot among rice varieties, which may cause a large variation in yield loss caused by the disease. Therefore, the resistance level of rice varieties and their yield reduction has to be regularly evaluated and updated. There are only a few reports on the relationship between brown spot severity with yield and yield loss of upland rice, and is even lacking in pigmented upland rice. The objectives of the present study were to assess the brown spot severity and resistance level in pigmented upland rice cultivars from East Nusa Tenggara Province, Indonesia, and to elucidate their relationships with yield and yield reduction. Twenty four pigmented upland rice genotypes were evaluated in the field during May to October 2019, and their disease responses and yields were recorded. Disease severity was observed weekly and used to calculate Area Under the Disease Progress Curve (AUDPC) for comparison among the genotypes. The relationships between disease severity and AUDPC with yield and yield loss were also examined. The results showed significant variation in brown spot severity and AUDPC, ranging from, respectively, 11.11% to 40.70% and 398.42-days to 1081.30-days. Yields and yield losses of test genotypes also varied substantially. Yields under diseased-free and diseased plots ranged from, respectively, 2.34 t ha-1 to 6.13 t ha-1 and 1.68 t ha-1 to 3.74 t ha-1 while yield loss was between 10.46% and 56.15%. Six genotypes were moderately resistant, four genotypes were moderately susceptible and 14 genotypes were susceptible to brown spot. Neither disease severity nor AUDPC had a linear relationship with yield but both exhibited positive and linear relationships with yield loss.

Most read articles by the same author(s)